Vignetting as a powerful tool in lens design By: Erin Elliott and Ken Moore

Vignetting factors are a powerful tool in lens design that are underused today. Using vignetting, lenses can be made smaller and lighter, and can have better performance over a wider field of view.

In a vignetted system, apertures trim the optical beam at wide field angles. This typically causes the final image to be darker at the corners than at the center, which is undesirable. But it also improves the quality of the image in those regions by trimming away some of the aberrations in the beam. This allows for designs that use fewer or simpler lenses than a comparable system without vignetting.

Wide-angle camera lenses have traditionally been designed with some vignetting. But vignetting is now appearing in many photographic systems due to advances in image processing that can compensate for the loss of illumination. Optical designers must know how to use vignetting factors early in their design process, to avoid overdesigning their systems.

In traditional photography, the use of vignetting was fairly limited because the images could not be easily enhanced or combined. Each photograph was connected to just one exposure time. Selecting a short exposure that revealed the details of a bright object would leave the vignetted corners of the image dark. Selecting a longer exposure that revealed the details in the vignetted corners meant saturating the bright object in the scene. Any changes to the image had to be made directly on the photographic negative using chemical processes.

With the advent of digital photography, it became possible to take a photograph and digitally manipulate it on a home computer. Vignetted regions of the image can be amplified. But this method is limited. For very dark regions, amplification just amplifies the noise in the image, because the underlying signal (or image details) are just not present.

For example, in the images below, the first exposure is short and captures the details of the bright sky. The trees are underexposed. In the second image, the exposure is longer and captures the details of the trees. But the sky is overexposed. If you're skilled in photo editing tools, you could take the time to pick out the sky from image one and combine it with the trees in image two to create a final image that shows both sky and tree details.

Now, though, powerful computers have been added to digital cameras. Combining images with different exposures can be done in real time in the background. For example, a Sony a7R III camera can take up to five exposures at different f-stops in quick succession. It then finds the best exposure available for different parts of the image, and digitally stitches them all together. The image below, from the a7R III, shows detail in both the sky and the trees. 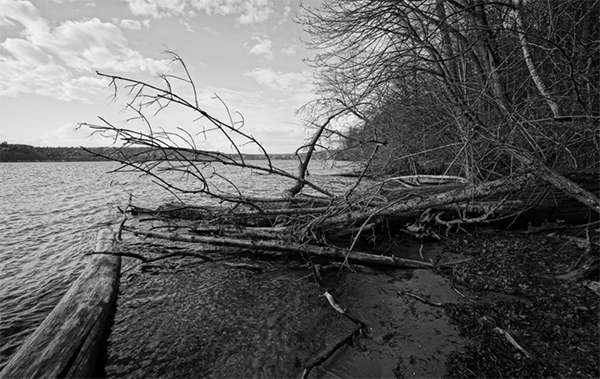 The same stitching process can be used to compensate for fairly large amounts of vignetting in the lenses of the camera. The lenses for the camera system, then, can be simplified; the simplification introduces additional aberrations, but those can be trimmed away with vignetting. The loss of illumination at the corners can be corrected by the onboard image processing in the camera.

At the beginning of the design process, we won't know how many lenses are needed, the types of lenses, or what the clear apertures of those lenses should be. But if we know that 30 percent vignetting is acceptable at the corner of the field of view, we can place that information into the model using vignetting factors. The vignetting factors allow you to specify a smaller beam in the entrance pupil of the system, even before you've gotten the apertures and number of lenses worked out.

Vignetting can be modeled in OpticStudio manually and automatically using five scale factors: VCX, VCY, VDX, VDY, and VAN. These vignetting factors allow the user modify the size, shape, and orientation of the beam in the entrance pupil as seen by any field point in the system. Rays will then be launched from each field point to uniformly illuminate the modified pupil.

A typical design flow for a vignetted system is:

Vignetting factors are critical for avoiding an overdesigned system. Without vignetting factors, we would design a system that corrects the aberrations for the full-size beam over the entire field of view of the system. The result would be a lens system that is overcorrected; when the real aperture sizes are applied to the lenses, the vignetting from the real apertures would result in performance at the corner of the fields that is better than what is strictly necessary.

In this new world of onboard image processing, optical designers must understand vignetting and use vignetting factors effectively to create smaller and lighter optical systems.